Vienna International Airport accommodation Vienna International Airport is the busiest airport in Austria and an important air traffic hub used by people from big part of Central and Eastern Europe. The airport is located near the city of Schwechat about 15 km to the south-east from Vienna city centre. Hotels directly at Vienna Schwechat Airport [more…]

Eurolines bus from Vienna to Brno and Prague Update: At present, Eurolines do not operate any buses between Vienna Schwechat Airport and Brno. Eurolines operate direct route from Schwechat Airport to Brno. The price is lower compared to Student Agency: one way ticket to Brno is EUR 8.20, return ticket is EUR 14.70. Some buses [more…]

Getting from Meidling Station to Vienna Airport

Wien Meidling Train Station Due to the construction of the new Main Train Station in Vienna and the closure of Südbahnhof for long-distance trains, the train station in Meidling has become an important hub for many people travelling to or through Vienna using a train. Those who need to get from Wien Meidling Station to [more…] 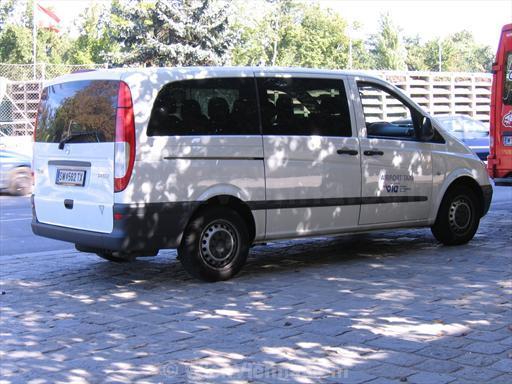 Vienna Airport Taxi Vienna Airport Taxi car standing near the entrance to Schönbrunn Palace. In front of Schönbrunn you can always see numerous buses and taxis. As one of the main landmarks of Vienna, the castle is easily accessible from anywhere in the city by taxi, bus, or metro. U-Bahn station Schönbrunn is located about [more…]

Transferring in Vienna The advantage of Vienna International Airport compared to some other airports is relatively short distance between gates. Therefore, a transfer should not take much longer than 30 minutes if necessary. Thanks to the airline alliances, the flights often match perfectly and there is not much excess time. After leaving the aircraft, follow [more…]

Parking lots at Schwechat Airport There are numerous parking facilities at Schwechat Airport with total capacity in excess of 23,000 cars. Prices vary across these parks and therefore it is advisable to choose the right one for your particular purpose. Short terms parking, picking up somebody If you need to leave your car just for [more…]

Getting from Vienna Centre to Schwechat Airport

City Airport Train (CAT) There are two competing train services between the city and the airport. City Airport Train or CAT service, operated by the airport company, is faster (takes 16 minutes), but more expensive (EUR 9 for one way, EUR 16 for return ticket). The CAT leaves from Wien-Mitte station, easily accessible by multiple [more…]