Resselpark is a large park at Karlsplatz in Vienna city centre. On the picture you can see Resselpark from the entrance to Karlsplatz metro station in the middle of Karlsplatz. Behind the trees you can see Karlskirche (Charles Church). 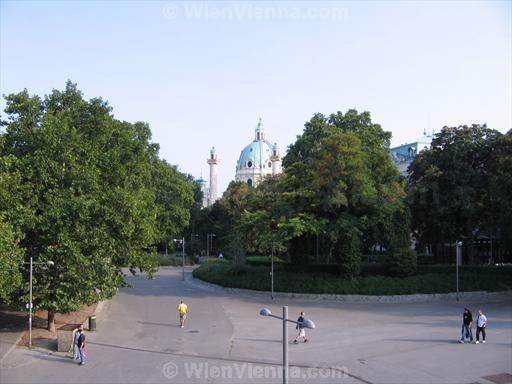 Here you can see other pictures of Resselpark, Karlskirche, and Karlsplatz:

Hotels near Karlsplatz and Resselpark

Karlsplatz is one of the typical hotel locations in Vienna. Accommodation options range from cheap hotels to 5 star hotels (though 3 star and 4 star hotels are by far the most common). Here you can see more details and tips about hotels near Resselpark and Karlsplatz.

Karlsplatz Station is one of the busiest stations in Viennese public transport system. It is the interchange of 3 metro lines (U1, U2, and U4). Karlsplatz U-Bahn Station has 2 exits: one at Karlsplatz (which you can see on the photo) and another one at the crossing or Ringstrasse and Kärntner Strasse in front of Vienna State Opera. You can walk underground between these two metro exits without having to enter the paid area of the metro.