Karlsplatz means Charles Square in German. Karlsplatz is located to the south of Innere Stadt, south-east of Hofburg, and north-west of Belvedere Gardens. It is one of the largest and busiest squares in Vienna. There are two parks at Karlsplatz – Resselpark (larger) and Girardipark (smaller). The best known landmark at Karlsplatz is Karlskirche (Charles’ Church). 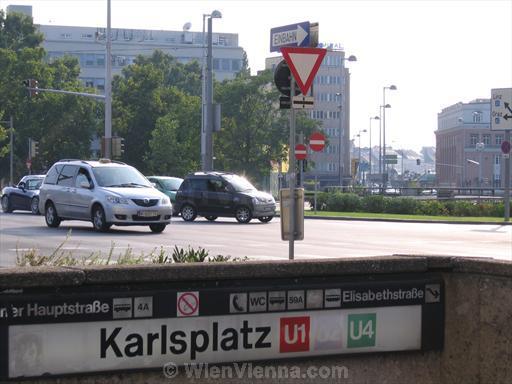 Karlsplatz is an important public transport junction. Karlsplatz Station is the only metro station in Vienna served by three metro lines (U1, U2, and U4). Besides the metro (called U-Bahn in Vienna), there are tram, bus, and Lokalbahn (something between a tram and light rail) services.

Karlsplatz Metro Station is very large and has two exits. One exit from Karlsplatz Station is at Karlsplatz (the square) itself – one of the entrance points on this side is on the photo. The other Karlsplatz Station exit is two blocks away at the intersection of Opernring, Kärntner Ring, and Kärntner Strasse, directly in front of the building of Vienna State Opera.