Karlsplatz is a large square in the southern part of Vienna city centre. It is the intersection of several big streets, including Lothringerstrasse, Kärntner Strasse, Getreidemarkt, Operngasse, and Wiedner Hauptstrasse. 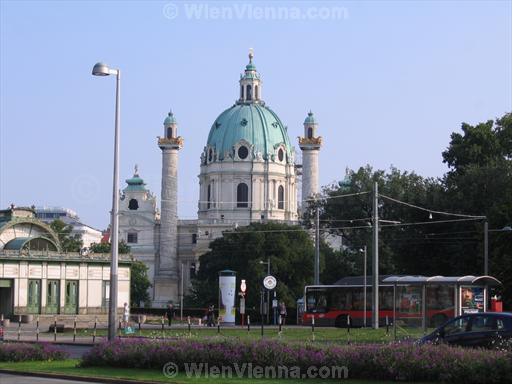 The best known landmark of Karlsplatz (which means Charles Square) is Karlskirche – Charles’s Church. Karlskirche is a very interesting piece of architecture. It has a characteristic ellipse-shaped dome and two robust columns.

Parks are often part of squares, but it is not very common for a square to have two parks within. There are two parks at Karlsplatz. The larger and better known park at Karlsplatz is Resselpark, which you can see on the picture in front of Karlskirche. The other, smaller park, is Girardipark.

Buses and public transport at Karlsplatz

Karlsplatz is one of the busiest public transport junctions in Vienna. It has three metro lines (the only station in Vienna metro network) and numerous tram and bus lines. Many of the trams and buses stop at Resselpark stop (on the picture).