Karlskirche (St. Charles’s Church) is located at the border of Vienna Innere Stadt (1st district) just outside the Ringstrasse at Karlsplatz (Charles Square). The church was build in the early 18th century, ordered by the Holy Roman Emperor Charles VI, who wanted to build a church dedicated to his patron saint, Charles Borromeo, believed to be the healer of plague sufferers (there was a big plague epidemy shortly before the church was constructed). Before the other of today’s buildings were built at Karlsplatz, Karlskirche could be directly seen from the Imperial Palace Hofburg.

See more information about hotels near Karlskirche in Vienna. 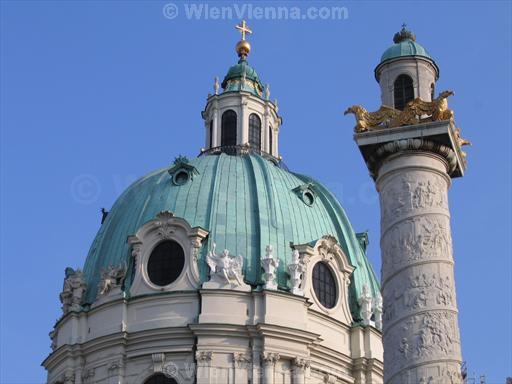 Vienna’s Karlskirche is a very unique piece of architecture and one of the most interesting baroque churches in Europe. It has a characteristic elongated ellipsoid-shaped dome.

There are two massive columns as part of Karlskirche (only one is visible on the photo), decorated with bas-reliefs, which show scenes from the life of St. Charles Borromeo. The two columns in front of the temple in Jerusalem, Boaz and Jachim, were the inspiration for those at Karlskirche. They were also the symbols of the imperial power and reminiscences to the Pillars of Hercules.

How to get to Karlskirche

It is very easy to get to Karlsplatz and Karlskirche from most places in Vienna. Karlplatz U-Bahn Station is the intersection of lines U1, U2, and U4. There are also numerous tram lines at Karlsplatz.