Although the “primary” landmark of Schönbrunn is Schönbrunn Palace, the huge park behind the palace offers several other tourist attractions and interesting places: the Gloriette (on the top of the hill on the picture), Neptune Fountain (at the foot of the hill), Schönbrunn Zoo, Tirol House, roman ruins, fountains, and vast arrays of perfectly organized flowers. 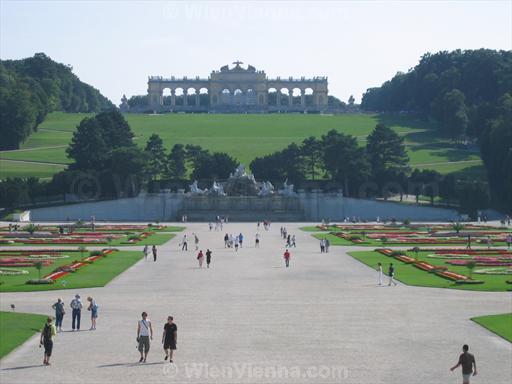 Things to do in Schönbrunn

Here you can read more about individual attractions and things to do in Schönbrunn Park.

Another picture of Schönbrunn

Here you can see another photo of Schönbrunn, this time looking in the opposite direction – from the top of the hill down to Neptune Fountain and Schönbrunn Palace.

Because Schönbrunn is outside Vienna city centre, the number of hotels is much lower here. Nevertheless, it is a very beautiful place to stay – very green, quieter, and in case of many hotels cheaper than Vienna Inner City. Here you can see more details and book hotels near Schönbrunn.

How to get to Schönbrunn