One of the monuments in Burggarten Park in central Vienna (probably the most popular monument in Burggarten is that of Mozart) is the statue of Franz Josef I, the long-ruling Emperor of the Austro-Hungarian Monarchy (see more details about Franz Josef I below). The statue was completed in 1904 (still during the life of Franz Josef) and placed in a park in Wiener Neustadt, a smaller town near Vienna. Only in 1957, long after the Emperor’s death, his statue was moved to its current location in Burggarten. 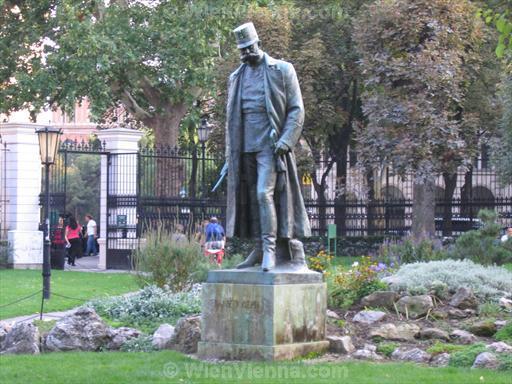 Franz Josef I ruled the Austro-Hungarian Monarchy in 1848-1916 – just a few days short of 68 years. During his reign (and shortly before it entered World War I and eventually disintegrated) the Austro-Hungarian Monarchy included many different countries and regions, among others the areas in today’s Austria, Hungary, the Czech Republic, Slovakia, parts of Poland, Italy, and Croatia – therefore it is no surprise that this emperor is known by various names: the most commonly used are Franz Josef, Franz Joseph, Francis Joseph, or Ferenc Jozsef.

Burggarten (can be translated as Castle Garden or Court Garden – see explanation of Burggarten’s name) is a large park immediately next to Vienna Imperial Palace (Hofburg) in the first district (Innere Stadt). It is situated in the centre of the main tourist area in Vienna and near many other landmarks and tourist attractions – the ones closest to Burggarten are Albertina Gallery, Vienna State Opera, or the twin museums at Maria-Theresien-Platz.