Wolfgang Amadeus Mozart is definitely one of the best known names connected with Vienna and Austria. It is therefore not a surprise that you can see Mozart’s statue in Vienna city centre. 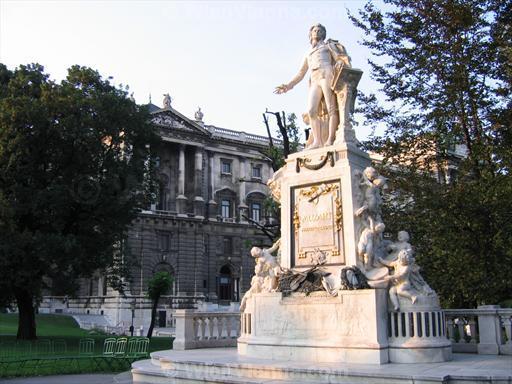 This monument of Mozart is situated inside the Burggarten (Imperial Palace Gardens). In the high summer tourist season, it is actually quite challenging to take a picture of Mozart like this one, because there are dozens of tourists wanting to do exactly the same in any part of the day.

Burggarten is a large park in Vienna Inner City (1st district, Innere Stadt), located next to the Imperial Palace Hofburg, Palmenhaus (a historical greenhouse), and Burgring (a section of the Ringstrasse). Burggarten is also very close to Albertina and Vienna State Opera. Here you can see another photo of Burggarten (without Mozart this time).

The Imperial Palace Hofburg in Vienna Inner City is the past seat of Habsburg Emperors and today’s seat of the Austrian President. It is a huge complex of historical buildings and a big tourist attraction. There are many hotels close to Hofburg and Burggarten. The best way how to get to Hofburg is by metro (U-Bahn). Nearby stations are Herrengasse, Karlsplatz, or Museumsquartier.