Reichsbrücke is one of the bridges over the Danube river in Vienna and one of the most important structures in Viennese transportation network. Reichsbrücke, which literally means Empire Bridge, is a two-level bridge. On the top there is a highway (officially not a highway, but a very wide and busy street) and on the lower level there are metro tracks and pedestrian pathways. This picture was taken from the pedestrain walkway looking up to the highway level of Reichsbrücke, showing one of the street light lamps. 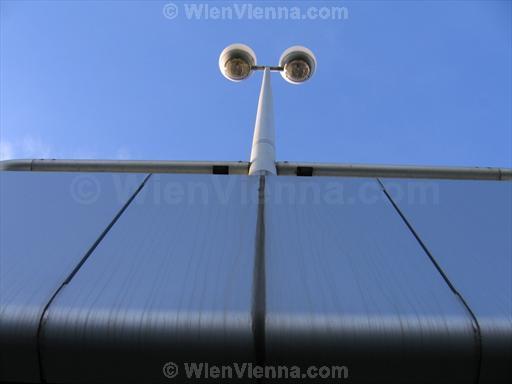 Reichsbrücke connects Vienna city centre with newer parts of the city on the left bank of the Danube. On the city centre side the bridge starts at Mexikoplatz, and on the other side it takes you to Kaisermühlen (Imperial Mills) and Vienna International Center, a large complex of convention facilities and United Nations offices, colloquially known as UNO Stadt or UNO City. Halfway over the Danube, Reichsbrücke goes over a large island, Donauinsel (Danube Island), a popular place to walk, jog, and relax for the Viennese.

The metro (U-Bahn) line that goes through Reichsbrücke is U1. Stations near Reichsbrücke include Vorgartenstrasse (near Mexikoplatz on the city centre side), Donauinsel (on the island in the middle of the bridge), and Kaisermühlen-VIC (next to the UNO City).