Burggarten means Castle Gardens. It is a large park situated next to the Imperial Palace Hofburg in Vienna Inner City (Innere Stadt, 1st district). You can access Burggarten either from the Ringstrasse (just about the border between its Burgring and Opernring section), or from Albertinaplatz and Palmenhaus. 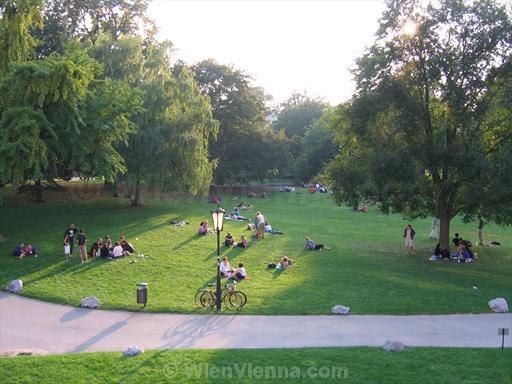 Burggarten is a popular place to relax on warm summer afternoons, for tourists and locals alike. The park is located in the centre of Vienna’s tourist area – there are many shops, restaurants, and hotels close to Burggarten.

Vienna city centre is known for its historical buildings, palaces, wide boulevards… and parks. There are many parks and trees in Vienna city centre. On the other side of the Imperial Palace from Burggarten is Volksgarten (which means Public Garden). Across the street from Volksgarten is Rathauspark (the park in front of Vienna city hall). Other large parks in central Vienna include Stadtpark (by the eastern border of Innere Stadt), Resselpark (at Karlsplatz), and of course Belvedere Gardens. Besides these large parks there are many smaller ones – the closest small parks to Burggarten are Schillerpark, Girardipark, and Maria-Theresien-Platz, which is not considered a park, but it is very green.

The Imperial Palace, known as Hofburg to the locals, is located just in the very centre of Vienna. Hofburg is a complex of buildings which has served as goverment and administration centre of Austria for centuries – as seat of the Austrian Emperors in the past and the Austrian President today. The Hofburg is also one of the most visited tourist attractions in Vienna. Its best known features are the Spanish Riding School (Spanische Hofreitschule) and the Schatzkammer. The U-Bahn station closest to Hofburg is Herrengasse (line U3)