Stephansdom South-Western Side and one of the Heathen Towers

St. Stephen’s Cathedral in Vienna, mostly known as Stephansdom, is one of the top landmarks of the city. You can find many pictures of Stephansdom on WienVienna.com. This one was taken from the south-western side from near the entrance to the South Tower. 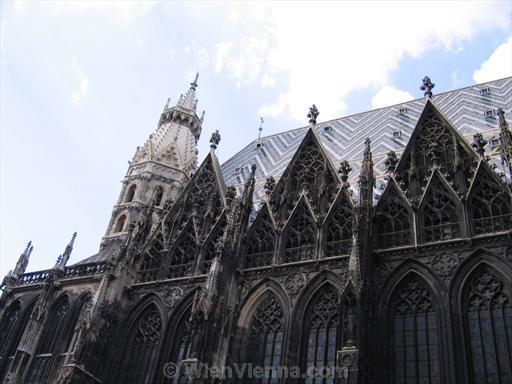 This part of Stephansdom’s exterior is a good example of its black and white looks. Originally the cathedral was all white, because it was built of limestone. Over the centuries, as soot and pollution from the air accumulated on its external walls, the white colour turned black. In the recent years, Stephandom is gradually becoming white again – thanks to the restoration. You can see one of the Heathen Towers on the picture – and it is all white.

There are two Heathern Towers in the front of Stephansdom. They are among the oldest parts of Stephansdom, dating back to the 13th century. Sometimes they are also called Roman Towers, because they were built in the Romanesque style. Stephansdom’s Heathen Towers are both 66 metres high and have octogonal base.

Stephansdom is located at Stephansplatz in the middle of Vienna Inner City. Stephansplatz is easily accessible from anywhere in Vienna city centre and it has excellent public transport connections (U-Bahn lines U1 and U3). There are many hotels near Stephansplatz and in the nearby Kärntner Strasse.