Palmenhaus is a greenhouse adjacent to Vienna Imperial Palace (Hofburg) and Burggarten, the Imperial Palace park. The greenhouse was first built in 1822 and then completely re-built to its today’s looks in 1901. The architect’s name was Friedrich Ohman. Palmenhaus is a typical example of the Jugendstil architectonic style, popular in Vienna around that time. It was closed to public in 1988 and then opened again after a substantial restoration ten years later. In these days, Palmenhaus still operates as a greenhouse and houses various exotic plants and flowers, some of which are used as decoration on official events. There is also a popular restaurant and cafe in Palmenhaus. 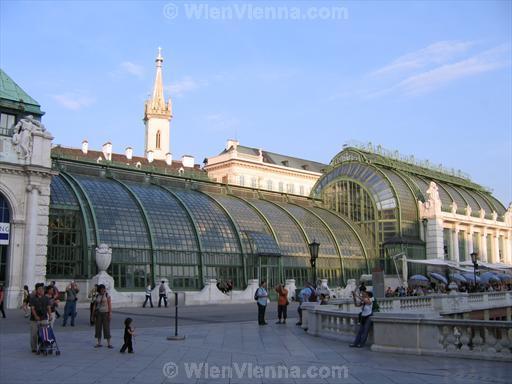 Burggarten (Imperial Palace Garden) is a large park, situated between Hofburg, Palmenhaus, Burgring (a section of Ringstrasse passing by Burggarten and Hofburg), and Goethegasse. Burggarten is popular with tourists and locals alike, especially on summer afternoons when people come to relax in the park.

Here you can see another picture of the same place, taken from a different angle (so you also see a piece of the Imperial Palace and Burggarten): Vienna Burggarten, Palmenhaus, and Hofburg.