Kärntner Strasse is a well-known street in Vienna Inner City. It goes from Karlsplatz (Charles Square) to Stephansplatz and St. Stephen’s Cathedral. If you look carefully, you can see the two Heathen Towers of Stephansdom in the background on the picture. 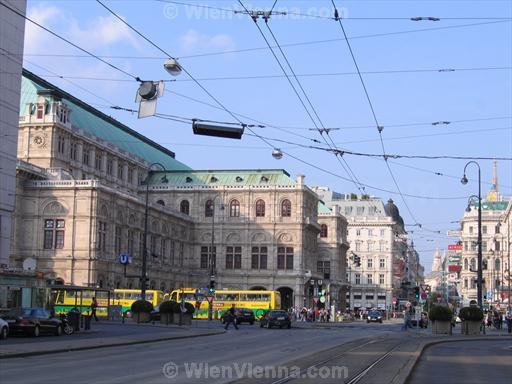 The junction you can see on the picture is the crossing of Kärntner Strasse with Ringstrasse, the circle street running around Vienna Inner City (Ringstrasse means literally Ring Street). Each section of Rinstrasse has its own name, mostly after nearby landmarks, places, or buildings. To the east from Kärntner Strasse, Ringstrasse is named Kärntner Ring, while in the west it is Opernring.

The building on the left (with yellow tourist buses in front of it) is Vienna State Opera (or Staatsoper), the world famous opera house, which gave its name to Opernring and also to Operngasse, which runs parallel to Kärntner Strasse on the other side of the State Opera.