Like many other cities, Vienna also has a church dedicated to St. Francis of Assisi, who is called Heiliger Franz von Assisi in the German language. The church is one of the most beautiful churches in Vienna and from a distance it looks more like a fairytale castle. Alternative name for the church is Kaiser-Jubiläums-Kirche (Emperor’s Anniversary Church), as it was built on the occasion of Emperor Franz Josef I.’s 50th anniversary on the Austro-Hungarian throne (the anniversary was in 1898, the church was built between the years 1898 and 1910). The architect was Victor Luntz. 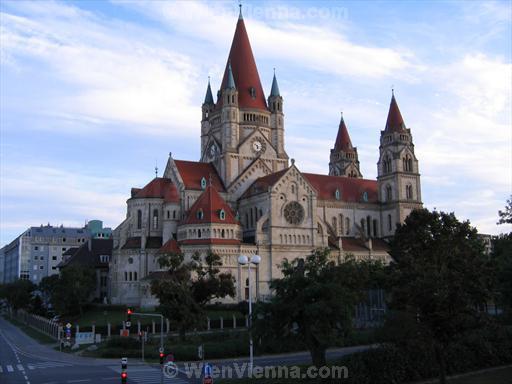 Getting to St. Francis of Assisi Church in Vienna

The easiest way how to get to St. Francis of Assisi Church from most parts of Vienna is by metro. The metro station closest to St. Francis of Assisi Church is Vorgartenstrasse on metro line U1, situated in Lassallestrasse about 100 metres from Mexikoplatz. Alternatively, you can get off the metro at the next station, Donauinsel (Danube Island), which is located in the middle of Reichsbrücke. Vorgartenstrasse and Donauinsel are 1 or 2 metro stops from Praterstern Station, respectively.