Museum of Natural History in Vienna

Museum of Natural History, also known by its German name Naturhistorisches Museum, is one of the two identical landmark museums at Maria-Theresien-Platz in Vienna city centre. Its twin is the Museum of Art History, or Kunsthistorisches Museum. Both buildings were built at the same time and opened in 1889, still under the Austro-Hungarian Empire under the reign of Emperor Franz Joseph I. 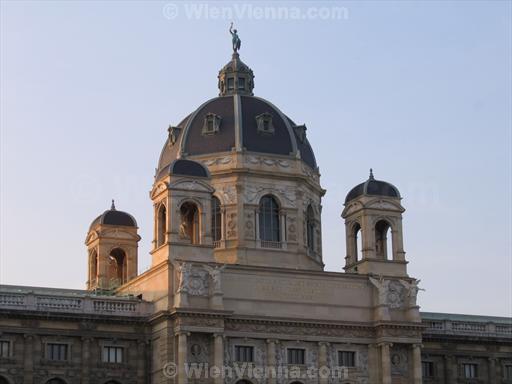 Museum of Natural History building and its dome

The collections of Vienna Natural History Museum include more than 20 million items of various kinds, from dinosaur skeletons over prehistoric art to birds and crocodiles. Some of the exhibited items were collected more than 250 years ago, many of them belonged directly to the ruling Habsburg family. Parts of the collections were exhibited in other places in Vienna even before the Natural History Museum building was constructed in 1889.