Stephansplatz: the middle of Vienna

When you look at a map of Vienna, you will see that the Inner City (1st district) has roughly a round shape. Right in the centre of this circle there is Stephansplatz, or St. Stephen’s Square. The square bears the same name as St. Stephen’s Cathedral, or Stephansdom, which stands here. 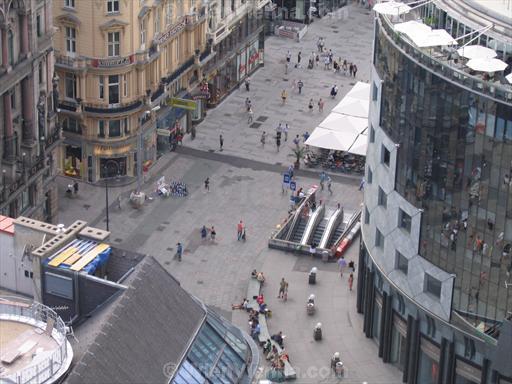 Tourists and hotels near Stephansplatz

During high tourist season Stephansplatz and the nearby streets are crowded by tourists who come to admire Stephansdom or to shop in the numerous shops in Graben or Kärntner Strasse, two of Vienna’s best known shopping streets which meet at Stephansplatz. There are also many restaurants and hotels near Stephansplatz. Its location is ideal for exploring the whole city. Many tourist attractions (e.g. the Imperial Palace Hofburg, Vienna State Opera, Albertina, or the Museums Quarter) are within 10 minutes walk from Stephansplatz. Other places in Vienna can be easily reached by metro (called U-Bahn in Vienna), whose two lines (U1 and U3) intersect at Stephansplatz Station.

View of Stephansplatz from Stephansdom Towers

St. Stephen’s Cathedral has two tall towers and both are accessible for visitors. Especially the South tower, one of the tallest church towers in the world, offers a wonderfull view of Vienna. From the South Tower you will see Stephansplatz and the people there far in the depth just like on this picture. Here you can read more about climbing on Stephansdom South Tower.

On the right side of the picture you can see the controversial Haas Haus. While most people didn’t like its modern design at the beginning, it has somehow fitted in over time. When standing at Stephansplatz and looking at Haas Haus in the right angle (not on this picture), you can see a reflection of Stephansdom on its glass facade.