The Austrian flag consists of three horizontal stripes – red, white, and red again. Because Vienna is the capital city of Austria and many buildings in central Vienna play important roles in the nation’s politics, economy, and culture, you will find the red-and-white Austrian flag virtually everywhere in Vienna – even in the place where you probably wouldn’t expect it: in the Schönbrunn Gardens, formed by the perfectly aligned flowers. 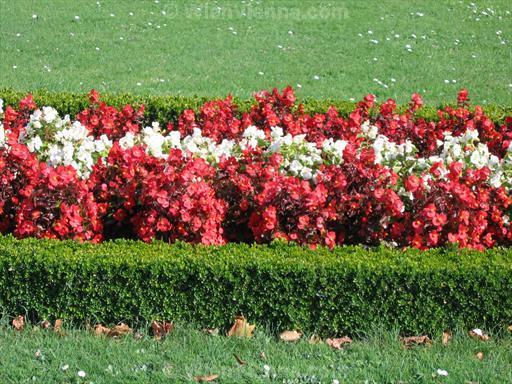 Schönbrunn Palace (the residence of the most powerful Austrian Emperors in the past) and the adjacent Schönbrunn Park are among the top tourist attractions in Vienna. Visitors admire the vast and well kept Schönbrunn Gardens with beautiful flowers and many of them take a slightly longer walk to see the famous Gloriette and various Roman ruins scattered around the Schönbrunn Park. Vienna Zoo is also located inside the Schönbrunn Park.

How to get to Schönbrunn Gardens

Schönbrunn Palace is located outside the inner city in the south-western part of Vienna. From Vienna city centre you can take U-Bahn (metro) line U4 (direction Hütteldorf) and exit it at the station “Schönbrunn”. Schönbrunn Palace and the entrance to the Schönbrunn Park are about 5 minutes walk from the metro station – it is well signed, but you would find it easily anyway as there will probably be dozens of other people in your train who are also going to Schönbrunn.