Kärntner Ring is one section of Vienna’s “Ring Street” – Ringstrasse, which goes in a circle around the first district, Innere Stadt (Inner City). 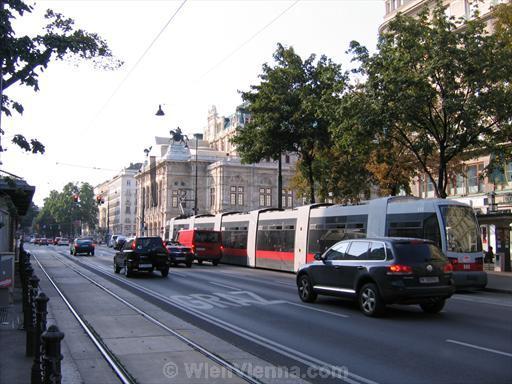 Kärntner Ring is located in the southern part of Innere Stadt. Its borders are marked by the crossing with Kärntner Strasse next to Vienna State Opera on one side (the building with black horses on the roof on the picture) and by Schwarzenbergplatz (square) on the other side. Neighbouring sections of Ringstrasse are Opernring (beyond Vienna State Opera) and Schubertring (beyond Schwarzenbergplatz).

Vienna State Opera (Wiener Staatsoper) is one of the best known landmarks, buildings, and cultural venues in Vienna – and a world-class opera house. It is located at the corner of Ringstrasse and Kärntner Strasse – two of the best known streets in the city.

Kärntner Strasse: the street of shopping and hotels

Kärntner Strasse is the traditional address of the most prestigious shops, cafes, and hotels in Vienna (for example, the famous Hotel and Cafe Sacher Vienna). During the day and up to late in the evening, it is crowded by tourists, but also locals out for shopping or dining. Kärntner Strasse connects Karlsplatz and Vienna State Opera with another Vienna’s top landmark, St. Stephen’s Cathedral.