Albertinaplatz is a square in Innere Stadt between Burggarten and Kärntner Strasse, behind Vienna State Opera, and next to Hotel and Cafe Sacher. It is mainly known as the location of Albertina Art Museum, but there is also the Austrian Film Museum and St. Augustin Church (Augustinerkirche) at Albertinaplatz. Streets near Albertinaplatz include Operngasse, Augustinerstrasse, Hanuschgasse, and Philharmonikerstrasse. 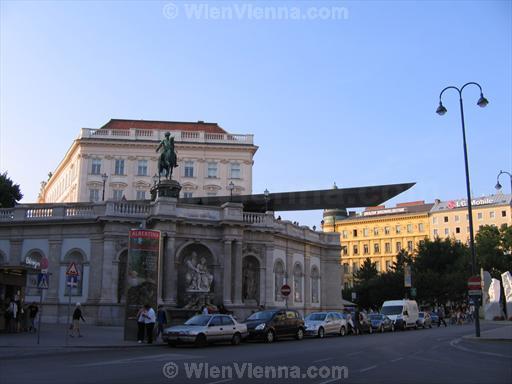 Albertina Art Museum is one of the best known galleries in Vienna. It focuses mainly on modern art and features permanent as well as temporary exhibitions. In Albertina Museum you can see graphic arts, architectural, and photographic collections. Here you can see more details about the location and hotels near Albertina.

How to get to Albertinaplatz and Albertina Art Museum

Albertinaplatz is just one block (that block is in fact just the building of Vienna State Opera) from Opernring. At the crossing or Opernring and Kärntner Strasse there is the northern entrance to Karlsplatz U-Bahn Station, which has access to metro lines U1, U2, and U4. Several tram lines also stop next to Vienna State Opera and on Burgring (on the other side of Burggarten Park).