One of the world’s most famous opera houses is Wiener Staatsoper, or Vienna State Opera, in Vienna Inner City. It is located at the crossing of Kärntner Strasse and Ringstrasse, on the way from Stephansdom to Karlsplatz. The area around Vienna State Opera is a popular hotel location. 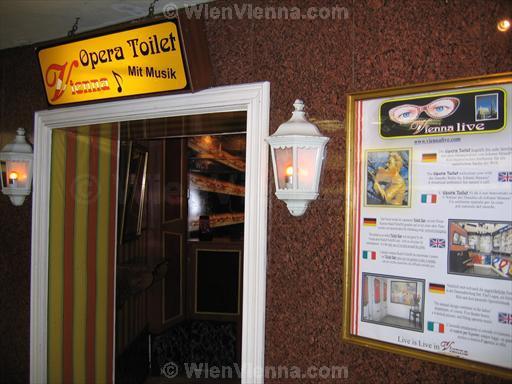 Basically it is just a normal toilet service located in the entrace hall of Karlsplatz Station under the crossing of Opernring and Kärntner Strasse. But it is the proximity of Vienna State Opera (just the stairs and you’re in front of Staatsoper building) and classical music what makes this toilet called “Opera Toilet”. You don’t even need to use the toilet to listen to the music – you can hear it in the Opera Toilet surroundings too.

Besides being a square, Karlsplatz is also a busy U-Bahn (Vienna metro) station, served by lines U1, U2, and U4. Karlsplatz means Charles Square in German. Here you can find more information about Karlsplatz Station hotels.