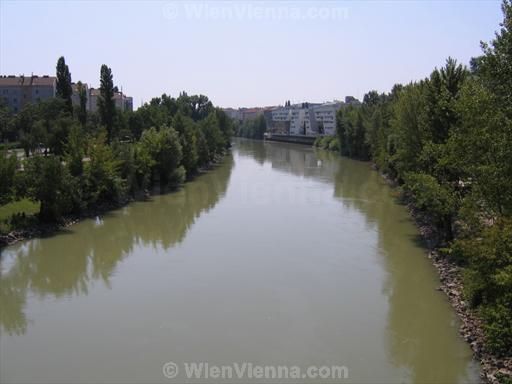 The water area on this picture is actually the Danube (or Donau in German), European second longest river. Well, not entirely. This is the Donaukanal, which splits from the main stream of the Danube in the northern part of Vienna (in Döbling) and runs through the north-eastern part of the city before entering the Danube again near Winterhafen.

Together with the Danube itself, Donaukanal creates a large island, separating the districts of Brigittenau (20th district) and Leopoldstadt (2nd district) from central Vienna. The famous amusement park Prater with the giant Ferris wheel (Riesenrad) is located on this island, as well as Austria’s main football stadium and the venue of Euro2008 final game (Ernst Happel Stadion), Messe Wien (huge exhibition and congress centre), and one of Viennese biggest train stations, Praterstern.

This picture shows the Donaukanal in the northern part of Vienna near Spittelau Station, looking towards the city centre. It was taken from the pedestrian bridge which connects the station with Brigittenau.

Water colour of the Danube

Though (almost) everything (including water in rivers) is usually very clean in Austria, you may not like the colour of the water in this particular case. The colour depends on the weather upstream the Danube; rain and erosion may change the colour significantly. Nevertheless, the Danube is normally quite clean and it is even possible to swim in the river or the adjacent bays in or near Vienna.